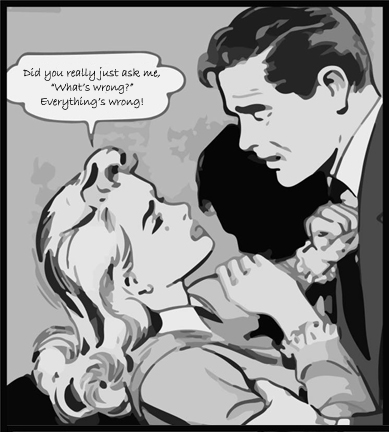 What was it that drew you to your significant other? Their blue eyes? Their ginger countenance? Their smile? Their voice?

Wiley let the magazine fall open. Of course it fell open to the center fold. He pulled the bottom of the page back so that he could see the photo. Immediately he developed one of those thousand yard stares and 17 year old Tyler knew, that although Grandpa was looking at the magazine, he was seeing something else.

Eventually, Wiley set the magazine on the table and showed the photo to his grandson. “You asked about your Grandma, Tyler, that’s your Grandma.” He said. “Since the fire, this is the only photo I have of her, everything else was lost in the flames. I had to buy this old Playboy on EBay to have this picture, and it cost a fortune but it was worth every penny.”

“I shouldn’t be looking at this Grandpa,” Tyler turned his head away, “She’s naked.”

“Of course she’s naked. She’s the Playboy centerfold model. They’re always naked. But look at her Tyler, it’s OK. Models pose and have their photos taken knowing that people are going to look at them. It’s OK to look.”

Tyler brought his gaze back to the page, “I never knew her,” he said, “But she looks like Mom, with different hair. She’s pretty.”

“Aye, she is pretty. That’s a fact; but the photo doesn’t show what made me love her. I loved her voice. Husky, soft, and melodic, every word she spoke was a song. When she talked the birds would hush their singing and listen. When she laughed the sky would smile.”

Perspectives on life, universe and everything Far away

Perspectives on life, universe and everything Struck

Yorkhull’s Blog Do we need a significant other?

A Squeeze of Bliss It’s Always Been About You.

All Things Cute and Beautiful Being Alone (Again)!