“You have ten seconds to live. Unless you can give me a compelling reason not to kill you.” He raised his pistol and pointed it at my head.

“I’m the executioner.” He said from behind the dark hood that covered his face.

“Yeah, I’ve heard that one before, this place is full guys who didn’t do it,” he said and you could hear the ice in his veins. “You got seven seconds left.”

“I’ve got a steel plate in my head. Shoot me in the head and you risk a ricochet that could come back and kill you instead of me; or kill you, along with me. Are you prepared to take that risk?”

“Bullshit. You got four seconds.”

I set down my coffee; reached around him and grabbed one of the magnetic “B’s” from the collection of letters that I used to write Haiku on the cell bars. I stuck it on my forehead. It stayed there. 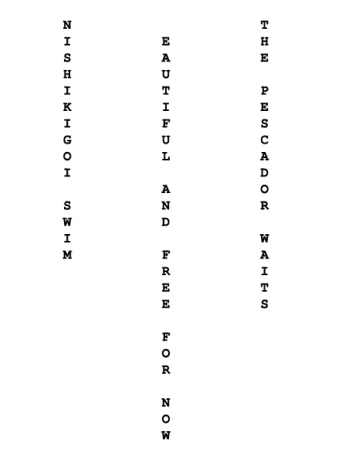 “You’re not kiddin’” he said and the muzzle of the piece dropped about 10 degrees.

The pistol dropped to his side and he reached back, opening the cell door. “Go,” he said, “Go through C Block and out to the gardens. You can get over the wall there. I won’t protect you though. You’re on your own. A guard sees you and he will probably shoot you in the back. Don’t matter how big that plate is then, does it?”

“Don’t thank me. I’m gonna sound the alarm in three minutes so you better get movin’.”

That was August 22nd 1999 and I haven’t stopped movin’ since. Every year on the anniversary of my freedom I dip my thumb in a cup of cold coffee and get a light object wet. Doesn’t really matter what it is, as long as it has a flat side, or is light enough, or both, it will stick to my forehead. I’ve stuck washers, paper, copper wire, beads, wood chips, glass, and any number of other things there. I’ve gotta stay in practice. Never know when I might see that executioner again.

A virtual oasis of joy and wonderment

An assortment of many different words, mainly arranged into sentences

Word of the Day Challenge

Bits of sparkles to entertain***** No ads, no spam, no awards - Thanks

She had the strength of an army embedded in her bones - R.H. Sin

A creative miscellany of mythic fantasies

My view, tho' somewhat askew...

Just a different point of view

Bits and Bobs helping people understand the language and process of literature and mathematics. In one place. Math and English in the same place. I know, shocking.

Write hard & clear about what hurts

A community for writers to learn, grow, and connect.

A Wife, My Verse, and Every Little Thing

Reinventing the Tagline One Existential Crisis at a Time

To participate in the Ragtag Daily Prompt, create a Pingback to your post, or copy and paste the link to your post into the comments. And while you’re there, why not check out some of the other posts too!

Poetry from a Dublin Scientist

"As we better understand the story, it is likely that its mystery does not decrease; rather it simply grows more beautiful" - Eudora A. Welty

Let Me Tell You the Story of...

A writing blog by H.R.R. Gorman